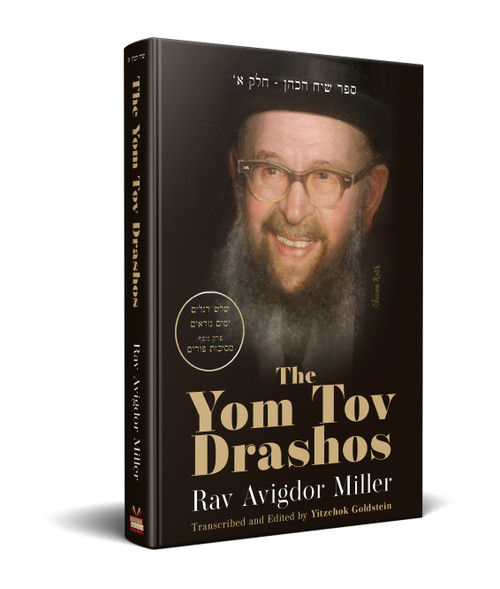 Transcribed and Edited by Yitzchok Goldstein

Rav Avigdor Miller’s legendary Thursday Night lectures were recorded and
have become deservedly famous. But what became of the drashos that could not be recorded?

What became of the words of inspiration the Rav delivered before tekias shofar on Rosh Hashanah…before Ne’ilah on Yom Kippur… or after Hallel on Sukkos? What about the thoughts shared at the shul’s Wine and Nut Party on acharon shel Pesach…and the comments delivered after leining Rus on Shavuos? What about the weekly drashos on Shabbos morning and Shalosh Seudos?

All these lectures — hundreds of them — might have gone lost if not for the mesiras nefesh of Reb Yitzchok Goldstein, a devoted talmid and member of Rav Miller’s shul. Reb Yitzchok attended nearly every minyan in the shul for thirty-five years straight, and rarely missed a shiur. And after Shabbos and yom tov, Reb Yitzchok undertook to transcribe from memory the Rav’s insightful and inspiring words.

Starting in the 1980s, Reb Yitzchok distributed these transcripts in the shul — averaging one pamphlet a year for thirty years. Now, a subset of those transcripts appears in book form for the first time: The Yom Tov Drashos of Rav Avigdor Miller (‘ספר שיח הכהן חלק א). This volume, the first in a series, also features an added chapter: the Purim mesibos.

Fortunately for Klal Yisrael, this loyal talmid did far more than capture his rebbe’s every word: He saved a treasure from being lost. On yom tov, this sefer will whisk you to the Bais Yisroel shul on Ocean Parkway, and you too will be zocheh to hear the Rav’s yom tov drashos.