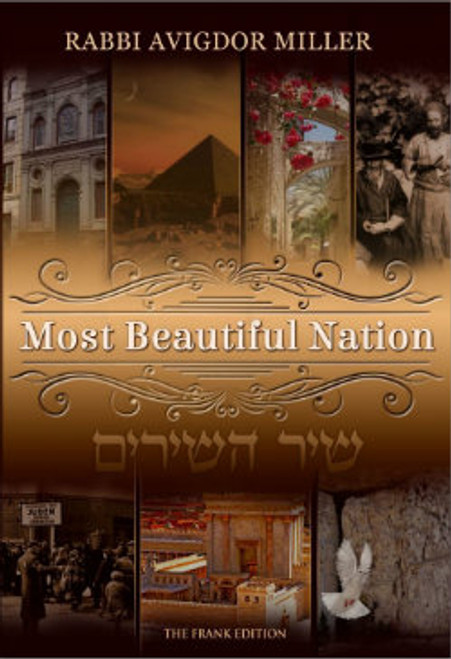 From the back cover:

In Shir Hashirim, King Solomon left to the Jewish people a treasure both enchanting and elusive. Beneath its oddly physical metaphor lies a deeply spiritual portrait of history’s most profound love: the love between Hashem and His Chosen People. Rabbi Avigdor Miller delighted in the sefer and quoted it frequently.

Most Beautiful Nation begins in the Holy of Holies and ends in the Garden of Eden. Along the way, Rabbi Miller takes you from the rivers of Bavel, to the shuls of New York's Lower East Side… from the Burning Bush at Sinai, to the ghettos of pre-war Europe… from the halls of Chizkiyahu’s palace, to the stores of Kings Highway, Brooklyn.

You encounter the impoverished Rabbi Akiva and his loyal wife Rachel, ride with the cavalry of Pharaoh, scale the peaks of emunah (faith), and greet Mashiach among the beggars of Rome. At each step of the journey, Rabbi Miller reveals more of the profound beauty hidden in King Solomon’s words.

Culled from Rabbi Avigdor Miller’s Shir Hashirim lecture series, Most Beautiful Nation is a vivid and uplifting story of love, loyalty and closeness to Hashem as only Rabbi Avigdor Miller could tell it. It is must-reading for all who take pride in being a member of Hashem's most beautiful nation.

E-138 - Jewels for the Beautiful Nation

Jewels for the Beautiful Nation (E-138)

Yisroel And The Nations